Chat with us, powered by LiveChat

Our Chairman, Tim Austin had the pleasure of attending as guest of Melbourne Rebels. What a great evening it was at Parliament House, sharing our love of the greatest game with Parliamentarians for Rugby. United under the Blue and Red of the Rebels, it was a great chance for both sides of the floor to come together for the love of rugby. 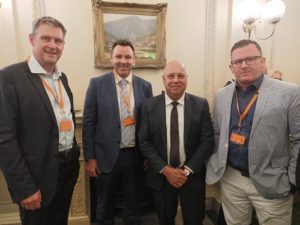